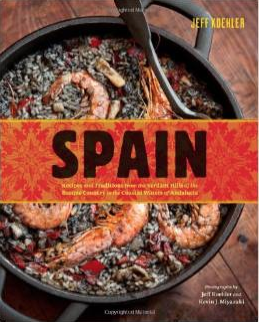 I recommend this cookbook to: people who have visited Spain, fallen in love with the food and culture of its various regions, who want a coffee-table picture book, with extremely authentic recipes to help them relive their experience. Also, for anyone who can’t afford to go to Spain, who wants a tour of all its regions vicariously–this is a book for you, if you’re willing to plop down $40.00.

I don’t recommend this for: vegetarians, or anyone squeamish about eating all parts of an animal (there were a few things that almost grossed even totally-non-squeamish me out).

Why I rate this book okay instead of great:

1. Mediocre design job–too many pages of difficult-to-read, small typeface on colored background annoyed me. Also annoying was the silly yellow splotchy ink-bleed (done on purpose) on the white page edges–for decoration! And the ALL-CAPS ingredient lists, in 2-column layout, make the recipes difficult to scan.

2. Too many recipes that aren’t really recipes. Example: Galician boiled potatoes with paprika, for which we’re instructed to scrub and boil potatoes, then peel them, drizzle with olive oil and sprinkle with salt and paprika. These psuedo-recipes serve to make the book thicker (each filling an entire page of thick, expensive paper), which adds to the cost of the book without providing enough value.

3. Although the authenticity is obviously impeccable, the cultural information presented is simply not compellingly interesting, mostly because it’s been said by everyone else who has written a Spanish cookbook or hosted a Spanish cooking show in the past 20 years (although this may be the first time it’s gathered into one volume?).  Because the author’s tone is journalistic, the writing leans toward dull. The photography is quite good, however, and brings the book back up couple of notches.

Why I liked it anyway: I LOVE cookbooks, and I generally find inspiration in all but the lousiest of them. Plus, the last three chapters (13–Desserts; 14–Drinks; and 15–Homemade Conserves) gave me some new and interesting ideas, which I definitely will add to my kitchen repertoire. The majority of cookbooks I encounter these days fail to show me anything new, so I really appreciated these chapters!

This year when our local farmer’s market was bursting with ripe tomatoes, I’m came up with this riff on Jeff Koehler’s recipes for Tomato Marmalade and Sweet Preserved Tomatoes with Thyme (I rarely follow recipes; I use them as springboards for my own inventions):

31 thoughts on “Review of "Spain: Recipes and Traditions," a cookbook by Jeff Koehler; plus a Tomato Marmalade Recipe”