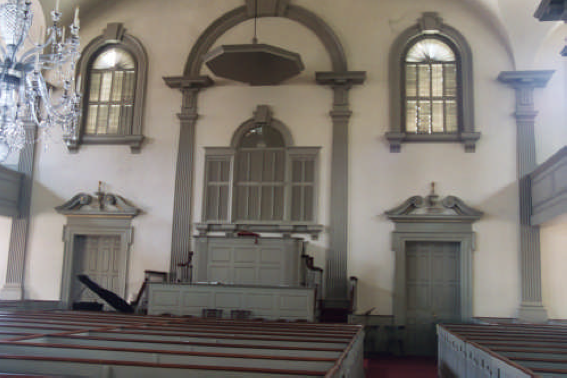 We’ve enjoyed art at the RISD museum, savored a delicious lunch at Pakorang on South Main Street, and crafted our own signature scent at Providence Perfume Company.

This article takes us to our fourth stop of the day, the First Baptist Church in America.

Are you ready for this? I wasn’t.

I was merely gazing at an old tea kettle in an old church when a serious matter crept up on me, insisting that I pay attention.

Maybe it’s because I was sitting in a church, in a city named Providence.
Roger Williams, expelled from the Massachusetts Bay Colonies for crimes of sedition, heresy and failure to take an oath of allegiance, purchased this land from the Narragansett Tribe in order to establish a haven for seekers of religious liberty.
Williams founded this city in 1636(!)  He also founded the Baptist congregation that built this meeting house in 1774-75. On the ground floor is a room refurbished in the 1950’s to display Colonial furniture and fixtures. There’s a shelf painted Colonial Red. It holds the Dexter family bible and other artifacts, including Roger William’s tea kettle.
Suddenly I found myself contemplating the man who articulated one of the root philosophies that led to the founding of the city of Providence–an ideology that Roger Williams named Soul Liberty. And I realized:

Where does all this political hatred, all this division over morality issues really come from? What is the root of this?
Some people mistakenly believe it is an argument between devoutly religious church-goers, and modern secular humanists. But if the root of the argument can be traced to the early 1600’s, when two camps of exceedingly devout Protestant Calvinists stood for opposite sides on this issue, then this cannot be about faith or absence of faith. Even today there are professing Christians on both sides of the right/left debate, just as there are, on both sides, people to whom faith means little or nothing.

If it’s not about faith, then what is it about?

The ages-old argument boils down to a fundamental belief or disbelief in what Williams called soul liberty. It is an argument about the role of government and the rights of individuals. It began in the early 1600’s and it still rages.

Which side people choose–Roger Williams’ or the Massachusetts Bay Colony Puritans’–is determined by their belief, or their non belief, in liberty of conscience for everyone.

“It is the will and command of God,” wrote Williams, “that a permission of the most paganish, Jewish, Turkish, or anti-Christian consciences and worships, be granted to all men in all nations and countries; and they are only to be fought against with that sword which is only (in soul matters) able to conquer, to wit, the sword of God’s spirit, the Word of God.”
Translated into contemporary Christian language:

Therefore Williams wrote and he preached against the people he considered enemies, but he did not restrict them from living as they chose to live. He did not coerce compliance. He did not use political or legal means to enforce his own beliefs, because he believed that worship of God and obedience to God are worshipful and obedient only when the are freely-given. As with all demonstrations of love, when compliance is forced, love is annihilated.
History, Williams said, proves that coercion leads to violence. He called it “spiritual and soul rape,” and saw that it caused endless bloodshed, cost countless lives through religious wars and inquisitions. “Rulers in all ages,” Williams wrote, “have practiced violence to the Souls of Men.”

Williams, a devoutly pious and outspoken Protestant, was opposed to the beliefs and practices Quakers, Jews, adherents to the Church of England, and Roman Catholics. Yet he established a colony which welcomed them and he defended their liberty to live according to their own beliefs.

Quakers who would have been tortured, executed or exported from the Massachusetts Bay Colony came to settle in Rhode Island. The first Roman Catholic Church, the first Jewish Synagogue, and the first First Baptist Church in America were all founded in here.

Roger Williams personally vehemently despised the Quaker point of view. He believed in, and the colony defended, his right to abhor, and to speak against, that which insulted his moral conscience.
But his belief in soul liberty insisted that he allow the Quakers to live in Rhode Island, even to be elected to govern. His principles kept him from using the force of law to expel his enemies or limit their right to share in the benefits of citizenship. And conversely, the principles of soul liberty prevented the Quakers from silencing or restricting Williams’ right to publish his opinions, to speak against the Quakers, to denounce their practices as wrong.

Adherence to Liberty of Conscience prohibits us from demanding that others accept, or live by, our moral standards.

Do you ever find yourself wishing we could all just get along, despite our differences?

(historical and architectural information summarized from the The First Baptist Church in America Self-guided Tour brochure and from The History Channel’s website.)

29 thoughts on “a Winter Day in Providence: Contemplating Soul Liberty”